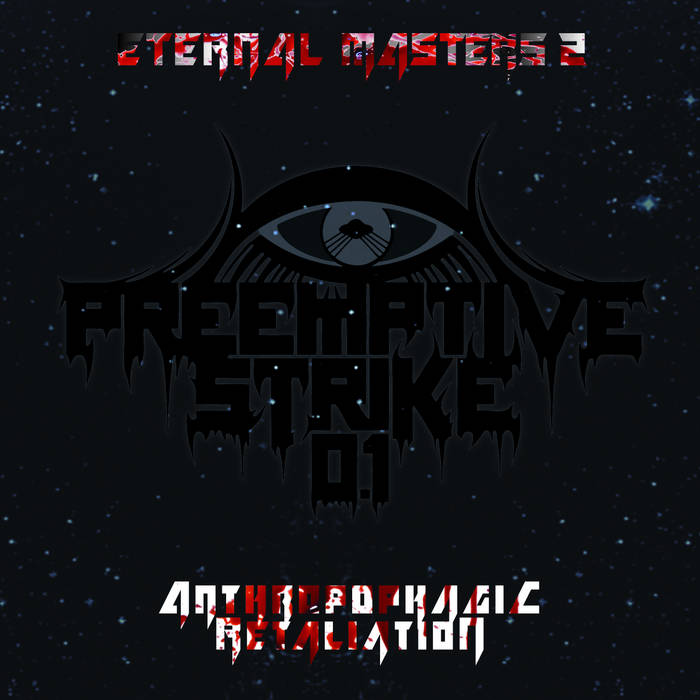 It’s been around 18 months now since PES0.1 dropped their industrial-metal mini-album “Eternal Masters” for DWA – followed by the old-school dark electro full-length “Through The Astral Cold”. Time now to return to the metal side of the band’s songwriting with 5-track EP “Eternal Masters 2: Anthropophagic Retaliation” - surely the hardest-hitting music they have ever made, and made up like the original “Eternal Masters” before it of alternate versions of tracks each recorded in collaboration with figures from the extreme metal scene!

Reaching right back to their pre-DWA days, “Anthropophagus” (from “Epos V”) is resurrected hot on the heels of their hit album “The Venomous” with the assistance of NIGHTRAGE – the Sweden-based Melodic Death Metal band founded by virtuoso guitarist Marios Iliopoulos and OZZY OSBOURNE guitarist Gus G - while the original made with cult Polish Black Metallers BLACK ALTAR is reanimated in an “Industrial Black Metal Version”.

Brand new song “Retaliation Of The Sovereign” comes in 2 dramatically different drafts courtesy of RED HARVEST (the legendary Norwegian band who basically created Industrial Death Metal, in their first new recording since 2010) and RAUBTIER (the most popular Industrial Metal band that ever found mainstream success in their home country of Sweden) – before being completely deconstructed and covered by Germany-based LYFTHRASYR (who even added their own intro “The Arrival”) with live drumming from Nefastus, former drummer of BELPHEGOR!

“Eternal Masters 2”: blacker, bleaker, bloodier… Twin twisted tales of vengeance, as musically merciless as the stories themselves, told with top-notch collaborators from around the world!

As we have now an entire album’s worth of amazing industrial-metal collaborations, the complete collection is now compiled and released together – both digitally and as a 2CD set with the first 100 copies coming in the same sumptuous 2CD digifile plus 8-page booklet packaging as RUINIZER’s recent “The Faceless Aberration” and featuring the same style of “spot gloss varnishing” across the front cover to create an impressive embossed effect.

And like the RUINIZER CD2 or C-LEKKTOR’s new single “Animals”, the 5-track “Anthropophagic Retaliation” disc comes on the rare and visually-arresting clear substrate CD format – where the transparency of the outer third of the disc allows for intriguing artistic effects. No mere CD, this!

The 8-page booklet – glued into the 100 Limited Edition 2CD digifile as per the RUINIZER album before it – contains lyrics of all songs from both “Eternal Masters” 1 + 2, plus all-new band photos!

Already own the original digipak edition of “Eternal Masters”, want “Anthropophagic Retaliation” on CD, but don’t want to shell out for the full 2CD collector’s edition? We’ve got you covered: a limited quantity of this new EP is also available in a standalone “Upgrade Edition”, coming in card wallet to minimize cost to you!

“Anthropophagic Retaliation” will be brutalizing your eardrums and beautifying your music collections from May 18th, and pre-order of both the double-digifile 2CD first edition and the standalone CDEP versions is open NOW!