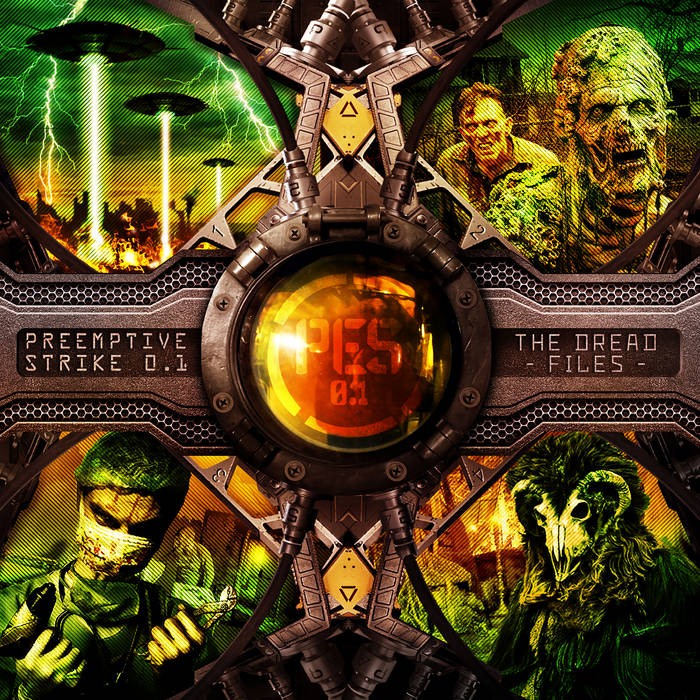 What might “The Dread Files” be? The very name is suggestive of both primal fears and the investigation of paranormal phenomena so often a feature of science fiction in Western popular culture over centuries…and what act off our roster is more infamously obsessed with such themes than Greece’s PREEMPTIVE STRIKE 0.1! At DWA we love nothing better than doing something different, so straight out of left field here is the latest unexpected pleasure we have for you - PREEMPTIVE STRIKE 0.1 are back with no less than 4 brand new songs…plus in what may possibly be a world-first (we haven’t checked to be honest, but it seems most likely!) 4 remixes from exclusively Belgian artists!

As if eager to confound expectations of their imminent demise due to the departure of co-founding member and principal songwriter George Klontzas earlier this year, Crete’s premier exponents of dark electro have returned already with this completely new concept EP - even with current album “Progeny Of The Technovore” barely 9 months old and still a hot tip! Self-producing for the first time, and with songwriting duties now falling fully on the shoulders of Yiannis Chatzakis – musically known mainly for his own DEGENERATED SEQUENCES project before now, and only secondarily as a member of PREEMPTIVE STRIKE 0.1 since their “Epos V” album in 2015 – what should the band’s many fans expect?

Based on “The Dread Files”, which neatly compartmentalizes all of singer Jim’s lyrical obsessions into 4 separate songs, the answer is a resounding “business as usual” – with no major differences noticeable despite the recent changes in production team. Opening track “Evolution/Retribution” speaks to mankind’s fears of alien invasion, encapsulated in the form of a surefire club smasher. “Wormfaced Cadavers” deals with the undead, “Doctor Dread” the familar figure of the mad scientist, “And You Will Wake Up In Terror” nightmares of the eerie and inexplicable – all set to a dark electronic soundscape simultaneously smooth and punchy.

The origins of the extended 8 track edition of “The Dread Files” can easily enough be traced back to the band’s first ever performance in Belgium earlier this year, and the friendships they either made or consolidated in their brief time there. Each of “The Dread Files” 4 different songs was beamed over from Greece into the hands of 4 different acts in Belgium to synthesize a hybrid of 2 completely different cultural takes on EBM - almost like something monstrous straight out of one of the sci-fi B-movies so beloved by the band itself. IMPLANT, LLUMEN, THE JUGGERNAUTS and IC 434 were all willingly enlisted to work their own dark electronic magic on “The Dead Files” material and the results combined to create an exact mirror image of the original, as seen through the eyes of some of Belgium’s dark scene stalwarts. If “Greco-Belgian Freundschaft” were a thing, this would be the epitome of it.

The first CD copies of “The Dread Files” come in a gatefold digipak edition, perfectly designed by Vlad McNeally to fully reflect the lyrical concepts of the 4 individual songs (or “Dread Files”!) each assigned to its own separate corner of the whole, while the lyrics themselves lurk on the inside cover. This digipak first edition is strictly limited to 100 units worldwide, and contains like the digital edition all 8 tracks.
For fans of vinyl, you can find the 4 original tracks of “The Dread Files” available as an ultra-limited edition lathecut 12” single – at 45RPM for maximum sound quality. As with previous vinyl versions we put out of PREEMPTIVE STRIKE 0.1 singles, the first 12 copies come on clear vinyl with a further 12 copies on black vinyl to follow – creating an entire quantity of 24 copies overall.